So first I got banned for pretending to be from an imaginary country, insulting the livestock dating tendencies of our imaginary enemies from a different imaginary country – https://monsterhunternation.com/2019/08/13/another-example-why-facebook-is-super-dumb/

Then my fans had a whole lot of fun with it and I got to do a prison break photo shoot – https://monsterhunternation.com/2019/08/14/why-facebook-is-super-dumb-part-ii-the-freedoming/

But that offended a bunch of assholes who decided we were having fun wrong – https://monsterhunternation.com/2019/08/15/the-super-dumbness-continues-mike-glyer-edition/

Which brings us to today: 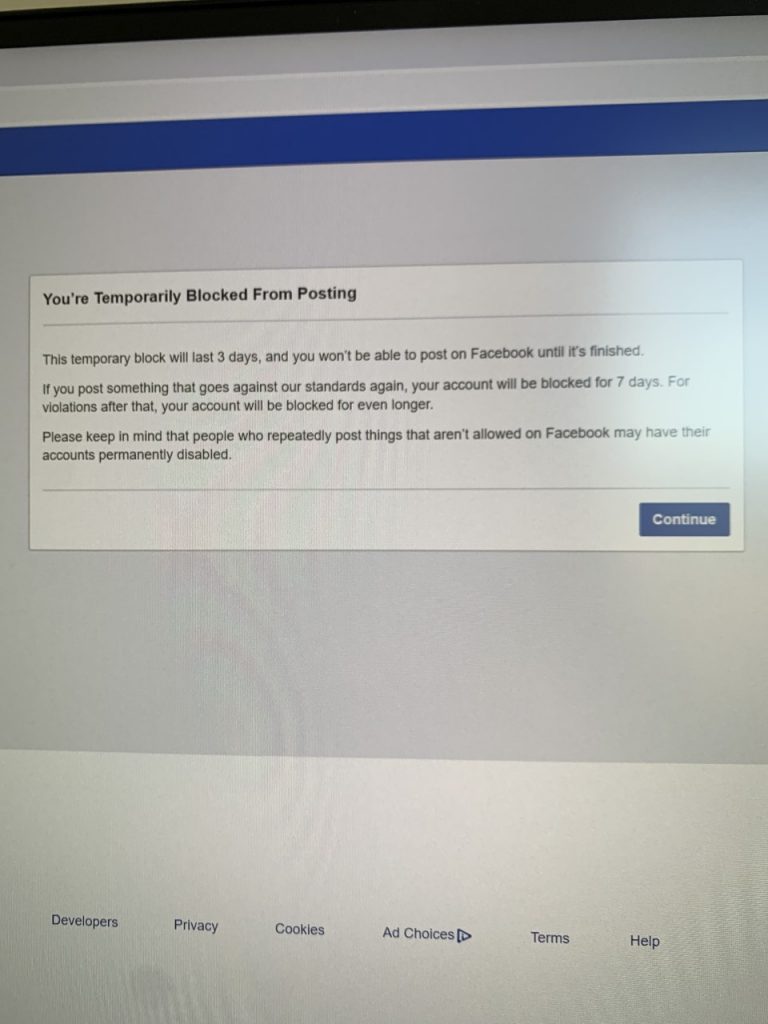 And they didn’t even tell me what I posted that violated their “community standards” this time.

There are a few issues at play here.

Second, scumbags have learned to weaponize Facebook’s lax stupidity. They simply find someone they don’t like, and then report their posts. Nobody with a brain ever checks to see if the complaint is legit or not, so they just block the bully’s target. It’s a wonderful tool for dickless cheese weasels to feel powerful.

How do we know they do this? Hell, they brag about it. Here is a screenshot from Fandom’s Pile of Cancerous Buttholes, File 770.  I tried to warn you how slimy these people are.

That pic right there demonstrates exactly what’s going to happen with Red Flag laws. Only with a SWAT team shooting your dog.

The other day well known actor (and conservative) Nick Searcy got banned from Facebook for three days because he posted a link to an article that mentioned him, and it got flagged for violating community standards on “nudity”. There were no pictures.

Of course this stuff only ever seems to go one way politically, with the conservatives and libertarians being the ones constantly banned, kicked off various platforms, demonetized, and censored for stupid shit. It’s no different than all the gun channels getting kicked off Youtube or last month’s attempt to remove all the non-liberal fiction authors off of Wikipedia.

The reason for this is twofold. Big Tech is overwhelmingly infested by hippies who figure they can forever get away with playing mind games with half the country.

But more importantly on a basic philosophical level, the left is always compelled to try and silence the right, while the right usually prefers the left to keep talking so that everybody can hear how stupid they sound.  So the whole deplatforming tactic seems alien to most of the people on my side.

But enough of that serious philosophical stuff.

As for me personally, I figure that the scumbags of File 770 will now go through my Facebook history and report quite literally everything I’ve ever written for violating community standards, so that I’ll be continually banned forever. It’s a perfect hobby for losers.

I’m not worried about it though. What scumbags never realize is that you can’t stop the signal. And the more they try all it does is make them look exactly like the pathetic, petty assholes we say they are. I’ll just go back to blogging more, and ask my now pissed off and motivated fans will do the signal boosting on there for me.

I did the same thing when Twitter was shadow banning non-liberals a few years ago. When I found out most of my followers couldn’t see my posts, I bailed out of there. Now I only go on Twitter to drop blog links and life is much nicer.

I’m on social media for one reason. That’s to sell books and interact with my fans. Everything else is a distraction (arguing with idiots mostly, though it does help me come up with snappy dialog). I used to primarily talk to the fans here, but for a while there it seemed like Facebook had killed blogging (people go wherever it is easiest to communicate) but now through their ham fisted, censorious ways, blogging might make a comeback. Why stick around on a shitty page where you can get randomly shut down by any idiot with an ax to grind?

On that note I really look forward to the day when after they’ve destroyed themselves through their hubris we talk about Facebook the way we talk about MySpace or AOL. The only thing more deserving of ignominious failure is Google, which is trying to be a straight up, ShadowRun style evil mega-corporation. My kids all laugh at Facebook, calling it a “boomer page”, and say that they don’t know anybody under 20 who uses it willingly. Everybody my age thinks it’s a joke, but they’ve stuck around because of inertia and they’ve not found something better. Counting on inertia is one hell of a business plan. I’m sure it will work out splendidly for them.

Honestly the biggest downside of this is that I do a lot of signal boosting for other writers on there. I’ve got a solid fan base already. The people I Book Bomb don’t. I’ve got a Book Bomb scheduled for Tuesday for two awesome authors who deserve the exposure (mark you calendars) but if I was to lay odds right now I’m betting I’ll be banned for something else by then (some of my old mini pictures will be hate speech or something).

Oh, and since I’m getting reported by the shitheels from File 770 here’s another author’s experience with what a lying scumbag Mike Glyer is, where Glyer was so dishonest that he pretended to be someone else to post a bunch of slanderous nonsense, but also so stupid he did it from his home IP. https://scifiscribe.com/2019/08/15/is-chinamike-unwilling-or-just-too-stupid-to-learn/?fbclid=IwAR3ZkbQV1-Dc_Hfpx3WExQMYrIKw9lf29UrsMQQCaXVCZ8sFR40NNDkSUXk

And also yesterday I heard from a different author how China Mike put up a pirate link to one of this author’s stories, and when that author contacted Glyer demanding it to be taken down, Glyer got all self-righteous and started bitching about civility again. Sure. He’s stealing from you, but how rude of you to be upset that you caught him stealing from you.

I tried to warn you about these people.

But don’t worry everybody. Facebook takes the concerns of petty, vengeful morons very seriously (and so will your local SWAT team once Red Flag laws pass!). I’m sure this will all work out splendidly.

I’ll be back on FB in a few days. In the meantime a bunch of the fans have gone over to MeWe as a fallback. I’ve set up an account there but haven’t used it yet (see what I mean about inertia?) but I’ll probably check it out after I get the day’s paying word count done.

75 thoughts on “Banned Again. Facebook Gets Even Dumber, Part III: The Saga Continues”